In or Out: Why Europe needs the sea more than ever

The Maritime Foundation, the leading organisation promoting the UK’s interests across the maritime sector, held a top-level briefing entitled The EU, Britain and the Sea – Fisheries, Shipping and Maritime Security.

The overall message is that whatever the outcome of the UK referendum on the EU, both Britain and Europe must wake up to the value and vulnerability of its vital maritime sector in the rapidly changing and increasingly dangerous world of geo-politics.

The briefing, at the Naval Club, Mayfair, London, was organised to heighten awareness of the maritime dimension. Around 50 distinguished experts gathered to discuss a wide range of subjects all linked by the sea and European policies.

“This international initiative received almost no coverage in the main national newspapers and illustrates the low priority assigned to maritime affairs in this country in spite of it claiming to be a maritime nation.

“The sea is vital to Europe just as it is vital to Britain. It is the principal medium of international and inter-regional trade. The seas around Europe sustain an essential resource of fish and shellfish which supports a major fish processing industry: so maritime security is a vital issue too.

“The briefing has been organised to heighten awareness of the maritime dimension. In or out, the sea may not have a voice but neither will it go away.”

Among the speakers were:

David Balston, UK Chamber of Shipping director of policy, said: “The EU has been helpful in the removal of barriers to trade, customs duties and tariffs.”

“It’s created the world’s largest single market worth £11 trilllion – bigger than US and Japan combined; in additional there is international recognition of seafaring qualifications and a maritime security strategy.”

“Where the EU is unhelpful is with burdonsome regulations: so for example in the international shipping market ship owners cannot afford EU rates of pay in spite of owner union agreements. Under these conditions the only option for owners is to flag out.

“The EU is now making a third attempt to regulate port services when they are not needed, being already well run. Likewise, it is trying to regulate passenger liner and ferry operations, and introducing yet more unnecessary environmental regulations, which are unwanted.

“The EU could do more to guarantee state aid rules, cabotage rights, ballast discharge and pilotage. Most worryingly is the making of maritime laws by people who know nothing about shipping.”

Rear Admiral Chris Parry said: “There’s a world of opportunity in maritime security which the EU in the past has not taken seriously, although individual countries have sufficient heritage and expertise regarding the sea.

“There are now four or five empires in the world. Europe is a maritime continent, it’s a huge peninsular, but unless it gets its act together the continent will become a backwater in a constantly globalising world.

“The most overlooked key statement in the new accord between Russia and China to bring their twin resources together are ‘modernisation and mobilisation’.

“Their stated their commitment is to global de-Americanization, the recovery of rights and aversion to the current rules, plus setting up alternative trade and economic systems to by-pass the West.

“By 2025, the Russian rearmament programme will match NATO forces. The freedom of the seas is under threat from China. Russia is also land-grabbing as the Arctic ice recedes and China has said the traditional mentality that land is superior to sea must be abandoned.

“There is no EU position or policy on these crucial matters, and there’s been a total breakdown on immigration strategy, in spite of warnings for more than 10 years. By 2025 Europe will be on the edge of Columbus’ flat map.

“The British are a nation of traders. Britain should release our inner pirate! William Pitt the Younger said, ‘England has saved herself by her exertions, and will save Europe by her example.’ If we get out of the EU we can soar above the rest.”

Peter Hore naval correspondent said the EU has not developed the necessary core functionaries. “Our representation within the Commission is very small because most of our civil servants are not linguists,” he said.

“We are a nation financially dependent on free trade and immigration, with a steady supply of new labour. The problem of the EU is a democratic deficiency. Who can name their MEP?

“NATO has prevented war in Europe, but we cannot ignore our relationship with the US, which has an amazing ability to reinvent itself as often as Madonna!

Dr Bryce Stewart, of the University of York, said the Common Fisheries Policy (CFP) was the subject of huge criticism, but was responding to change: “Why abandon the ship when it’s improving? The biggest decline in UK fishing fleets was before the CFP and non-EU member Norway’s fleet has also halved.

“International fish stocks need international science and protection. The UK gets £300m annual EU funding and the fate of these initiatives after Brexit would be uncertain.”

Lars Carlsson, Windship Technology director, said that of the crises affecting the world, the most serious is emissions: “If we don’t do something about it nature will do it for us.

“By combining the opportunity of a shipping crisis with low ship prices, the conversion of vessels to wind power will save 30 per cent fuel and cut emissions compared to conventional ships.

“The EU means we can move together to give power to legislation and we must have international co-operation on this matter to make it work.”

Admiral Lord West, former First Sea Lord and Chief of the Naval Staff, who was present, said afterwards: “This has been a very useful discussion. There are real concerns about the lack of focus on maritime security issues in the UK and Europe. I think in maritime defence there’s not sufficient appreciation of the growing pressures on us.”

Will the outcome of the In/Out Referendum turn the British Lion into a toothless pussycat inside an unreformed EU? A pussycat whose interests can be ignored in a headless rush towards ever-closer political union? Or will the British Lion become a wild cat outside the EU, free to pursue policies tailored to its interests?

Results from a straw poll based at the conclusion of the briefing on how delegates intended to vote in the EU referendum were: 53 per cent to remain in the EU and 47 per cent to leave. 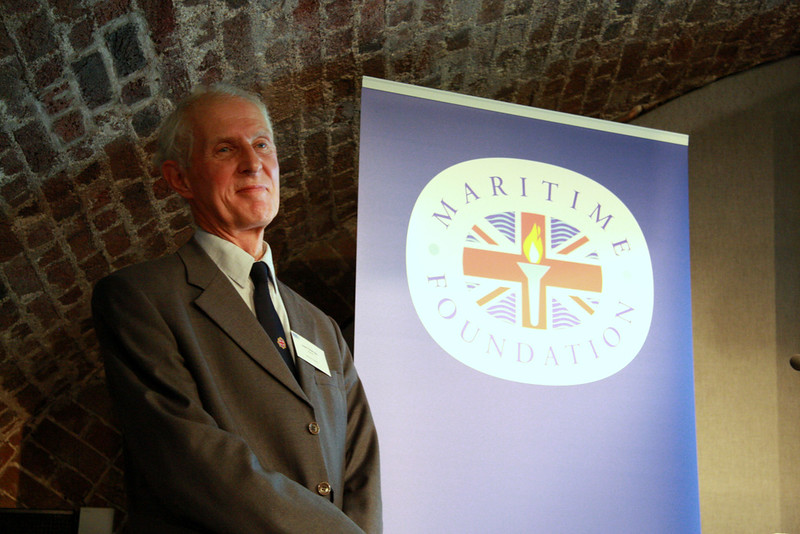 The briefing is one of two main national regular events organised by the Maritime Foundation, with the next being the Maritime Media Awards, in London, on 25 October, 2016. The Maritime Foundation promotes Britain’s interests across the entire maritime sector. Its purpose is to inform and raise public and parliamentary awareness of the importance of Britain’s maritime industries, commerce and defence through education, training and research, as well as through the Foundation’s annual Maritime Media Awards.

For more information about The EU, Britain and the Sea, visit www.britainandthesea.org