Naval leaders and British peers gathered in London tonight (November 12) for the Maritime Media Awards honouring the best of British maritime literature, journalism and filmmaking in 2015.

More than 150 guests attended the Institute of Directors for the 20th anniversary of the awards.

It saw the Desmond Wettern Media Award for best Journalistic Contribution handed to Rear Admiral Chris Parry CBE for challenging infractions of the UN Law of the Sea Convention by various countries. In a wide range of publications and conferences around the world Rear Admiral Parry has championed the rights of innocent passage and the vital message that the sea is the facilitator of globalization and the key medium for exchange.

The Mountbatten Award for best Literary Contribution – the Man Booker Prize for maritime – was awarded to Professor Barry Gough for Pax Britannica, a history of the British Empire between 1815 and 1914 illustrating the immensity of Britain’s global ambition and the controlling influence of the Royal Navy.

Meanwhile, the Donald Gosling Award for best Television Contribution was presented to National Geographic and Windfall Films, for the documentary ‘Raising the Costa Concordia’ (full list of winners in notes to editors).

“The Maritime Media Awards has become an event of national significance, acknowledging remarkable maritime related work which deepens understanding of Britain’s dependence on the sea,” he said. “This year’s nominations have revealed the exceptional talent that is contributing to our awareness of maritime issues. This is a great necessity as Britain remains firmly dependent upon the sea for its imports and exports, fisheries, leisure activities, offshore oil extraction and defence.

“The awards were set up in recognition of the campaigning journalism of the late Desmond Wettern, whose name has strong resonance in the Navy and across the maritime sector. It first started with just two awards for journalism and Navy fleet media. They now embrace four other categories covering the best maritime literature, television programmes and digital media, as well as a lifetime achievement award for outstanding service to the maritime community.”

Professor Barry Gough’s comprehensively researched book Pax Britannica – Ruling the waves and keeping the peace before Armageddon – considers colonization, not simply as a matter of force but also effective administration. Key themes include the application of new industrial technologies, the rule of law, missionary work with its belief in God, education and hope as prime movers in the struggle to abolish slavery supported by trade and the largest merchant fleet the world had ever seen.

National Geographic and Windfall Films outstanding documentary ‘Raising the Costa Concordia’ provides an illuminating insight into the relentlessly complex challenges faced in the long, high-risk process of lifting the vast ship safely from the reef on which she was impaled.

Meanwhile, the First Sea Lord’s Digital Media Award was presented to The National Museum of the Royal Navy website for its presentation of naval history and heritage.

The Maritime Foundation’s Maritime Fellowship Award was presented to Professor Alastair Couper for his pioneering contribution as Professor of Maritime Studies at Cardiff University to maritime education and research. He was further commended for a career devoted to supporting the mariner both through the Seafarers International Research Centre and Seafarers Rights International.

Finally, the Maritime Foundation’s Lifetime Achievement Award for contribution to media presentation was awarded to Chris Terrill for his dedication and skill in presenting front line film, particularly relating to the Royal Navy and the Royal Marines.

Mr Parker said: “We receive tremendous support from a wide cross section of people within the British maritime sector including academics, media, peers, politicians and senior Royal Navy officers and members. They have all helped to make this landmark occasion, in the awards’ 20th year, a terrific success.

“The Maritime Foundation takes great pride in organising the event. We are a passionate charity driven to promote Britain’s interests across the entire maritime sector. Our purpose is to inform and raise public and parliamentary awareness of the importance of Britain’s maritime industries, commerce and defence. We do this through education, training and research projects in addition to the Maritime Media Awards.” 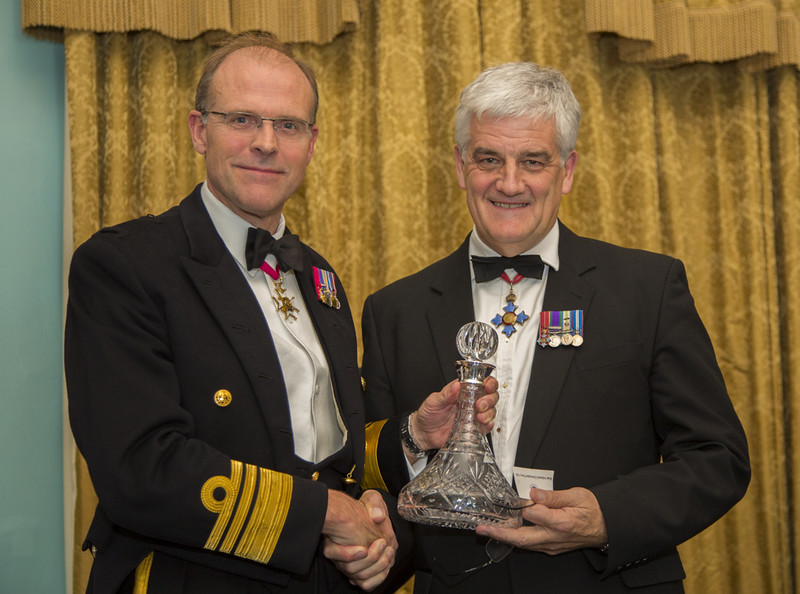 Desmond Wettern Fleet Award – handed to the HM ship, submarine, Naval Air Squadron or Royal Marine Unit that is judged to have made the best contribution to a positive image of the Royal Navy.

Maritime Fellowship Award – to honour an individual who has made an outstanding contribution to stimulating public engagement in maritime issues.